You are here : Home > News > Behind the Scenes at the IFF Atelier du Parfumeur in Grasse 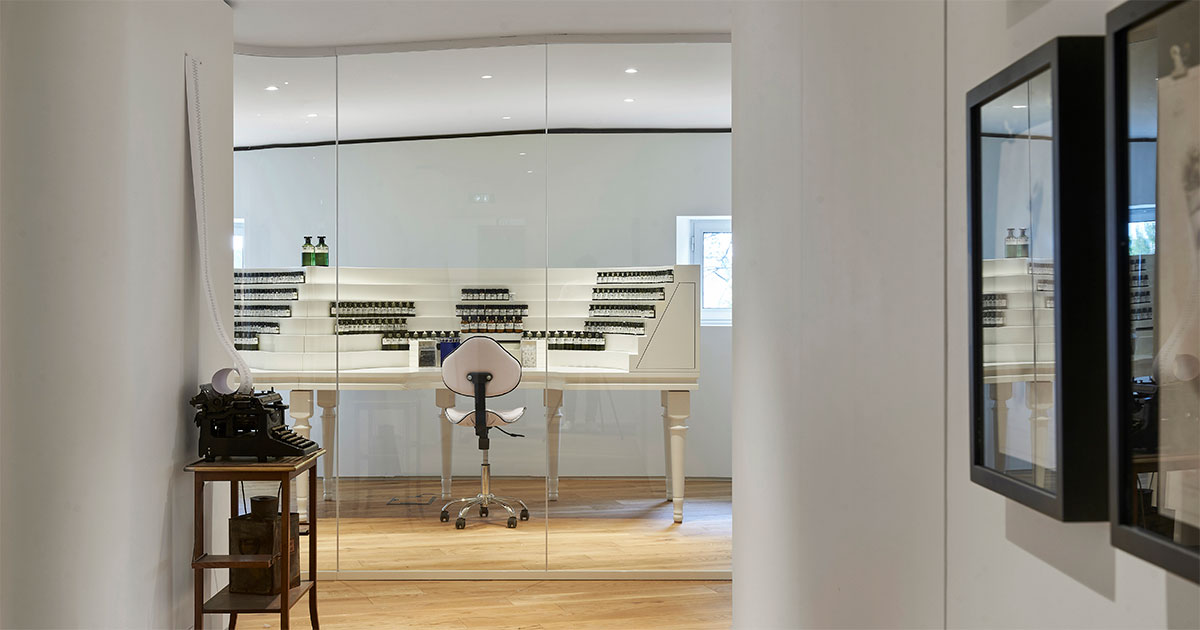 The Atelier du Parfumeur opened its doors in Grasse in May 2019. Created by the American fragrance house, the site was designed as an artist residence for perfumers. It will also be open to the public twice a year. Let’s go on a guided tour.

We’re on an industrial estate stuck in between a handful of roundabouts, surrounded by car parks and grey buildings. “We’re a long way from picture-postcard Grasse, aren’t we?” jokes Judith Gross. No rose fields in sight, no sculpted marble façades, and yet it’s here that in May 2019 IFF opened its “Medici villa for perfumers” as the Vice-President of Innovation Marketing calls it. Its purpose: “Create a welcoming space where perfumers can stay for a few days to work on a project, smell new ingredients and receive clients.” The goal is also to reinforce IFF’s attachment to Grasse, the historic birthplace of perfume, long forgotten, since transformed into the “place to be” for brands and fragrance houses, even before its classification as a World Heritage Site by UNESCO in 2018. The American fragrance giant acted as a forerunner in the year 2000 when it purchased the Laboratoire Monique Rémy (LMR), a Grasse-based company specialising in high-end, natural ingredients. Aimed at professionals, the Atelier du Parfumeur will also be open to the public twice a year for masterclasses with perfumers who will teach visitors the basics of their profession. For now, it’s a small group of journalists that is exploring the site.

If we are standing in the middle of an industrial estate, it’s because we are well and truly inside a factory. A production unit of the company Fragrance Resources (bought by IFF in 2016) actually occupies the ground floor of the building. Mandatory hygiene caps on, looking at the steel work stations covered in pots, funnels and other utensils, it feels as if we’ve just walked into a professional kitchen. But here, the recipes are made up of AmberXtreme, Cashmeran and orris. “Nothing is automated here. We do everything by hand,” explains the director of the factory. “Given the scale of the place, we can produce for big brands as well as for smaller ones. That’s a real bonus,” he points out. Indeed, about twenty operators are weighing out formulas by hand, ranging from a few kilos up to 10 tonnes.

Upstairs we find ourselves in the creative studio, where these formulas are developed. Antique furniture and décor, large bay windows letting in the southern light and a terrace with a panoramic view, this space was designed as a haven to remove perfumers from their stressful daily life and serve as a source of inspiration. Each perfumer has chosen an object to bring a personal touch to the two desks; the cover of Tintin’s Land of Black Gold was brought by Julien Rasquinet, a Belgian who has worked in Dubai, a “rainbow maker” (a crystal that refracts light to create a rainbow) by Juliette Karagueuzoglou, a Wonder Woman poster for Bruno Jovanovic (“I grew up with Proust and comics,” he explains) and the sculpture of the nose of Domitille Michalon-Bertier – this was the work of artist Anne Millot who recreated the work tool of 9 IFF perfumers for an exhibition in Paris in 2015.

On this day in mid-October, perfumers Domitille and Bruno are starting to reflect on their creations for the Speed Smelling, an event which has been giving carte blanche to IFF perfumers since 2009. “I often draw inspiration from my daily life, or my travels,” explains Domitille Michalon-Bertier. This summer, she discovered the Inhotim Institute in Brazil (modern art museum meets botanical garden in the middle of the jungle). “I want to create a perfume based on that duality, with a natural, organic aspect, while also feeling urban. To begin with, I will re-smell the natural ingredients that I want to highlight,” she explains. The perfumer wants to construct her composition around four ingredients which are native to Brazil: pink peppercorn, with its explosive, spicy and sharp scent that brings concrete or even metal to mind; green maté with its aromatic, slightly smoky smell, which has hints of hay and stables, both full-bodied and rough; copahu balm, with vanilla-esque, powdery, woody and tobacco notes; and tonka bean with its scent of hay and almonds, with a touch of smokiness. “What ingredients can I associate them with?” the perfumer wonders aloud. “When I think of Brazil, I think of coffee. Its roasted scent could work well with the smoky side of some of these ingredients. Brazil also makes me think of the Amazon rainforest and green smells.” We are now looking at tiny bottles from a perfumer’s organ, comparing the green scents: Triplal, (the most leafy), undecavertol (quite watery), cis-3-hexenol (which smells like an English lawn) and stemone (with hints of fig). Which will be the most suitable for the project? The cis-3-Hexenol is eliminated straight away. We’ll have to see what happens for the other would-be formulas waiting on test strips.

As for Bruno Jovanovic, he has decided to recreate the atmosphere of Roman Holiday, directed by William Wyler, a charming film which Bruno has watched again recently. “To recreate the frivolity of a Roman summer, and Audrey Hepburn’s cool sensuality, I’m going for a cologne, but with added femininity, sweetness and sophistication, to create an authentic perfume,” declares the perfumer. He will use: citron and mandarin, with their juicy, joyful, citrusy notes; Roman chamomile and caraway, for an Italian touch; aniseed, to match the colour of the actress’s Vespa in one of the most famous scenes of the film; rose; sandalwood; musk… but the starring role will be given to orange blossom. “This works very well in a cologne, it can have both a seductive and innocent quality which is what I’m looking for”. Now he just needs to find the ideal fraction which will reproduce this fragile balance of scents.

To do this, we’re heading off to the LMR factory, situated a stone’s throw from the Atelier. Monique Rémy founded the company in 1983 with the aim of producing high quality ingredients, at a time when adulteration (diluting or mixing with other products) was common practice in the region. LMR made a name for itself producing the crème de la crème of natural ingredients thanks to strict quality control and the expertise to enable the production of “specialities”. “Extraction doesn’t take place here. That’s done at the harvesting locations,” explains the Managing Director Bertrand de Préville. Aromatic essences and concretes arrive from all over the world to be transformed into secondary extracts: absolutes, molecular distillations, fractions and more. These make it possible to enhance or erase certain facets in the raw materials, thus creating tailor-made ingredients (and therefore difficult to copy), according to perfumers’ requests. When discovering the different fractions of orange blossom, from the most animal-scented to the clearest odour, and then on to the almost citrus or tuberose facets, Bruno Jovanovic falls for the fifth one. “Not too indole, and not too citrusy, it has a very floral quality. It’s elegant while remaining extremely bright. Perfect for Audrey Hepburn, don’t you think?”

Two free open days are held each year, with the first taking place in October. At each event, the programme includes two masterclasses with an IFF perfumer:

The masterclasses are open to a maximum of 20 people (10 per perfumer). The perfumers will select the participants, who must write a short text explaining what particularly interests them in the work of a perfumer.

Registration will open the month before the masterclass via the Instagram account @artofperfumeryatiff, where the starting date for sending applications will also be announced. 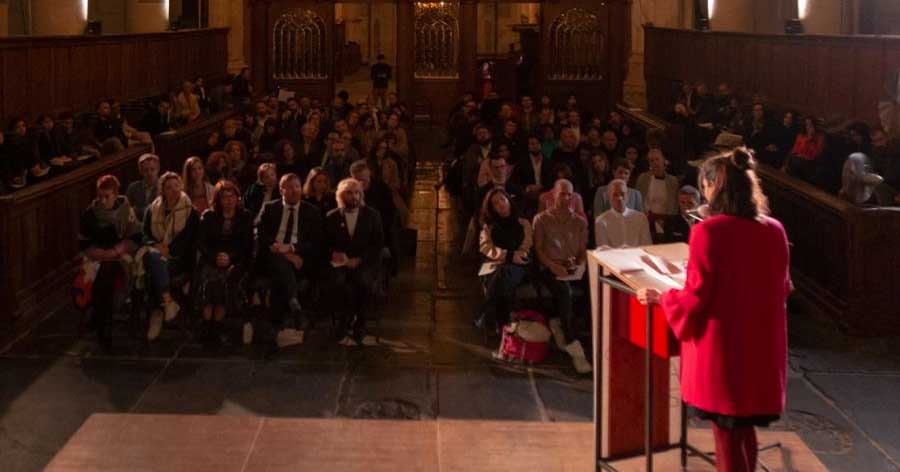 A soft manifesto on scent culture, by Caro Verbeek (en-it) 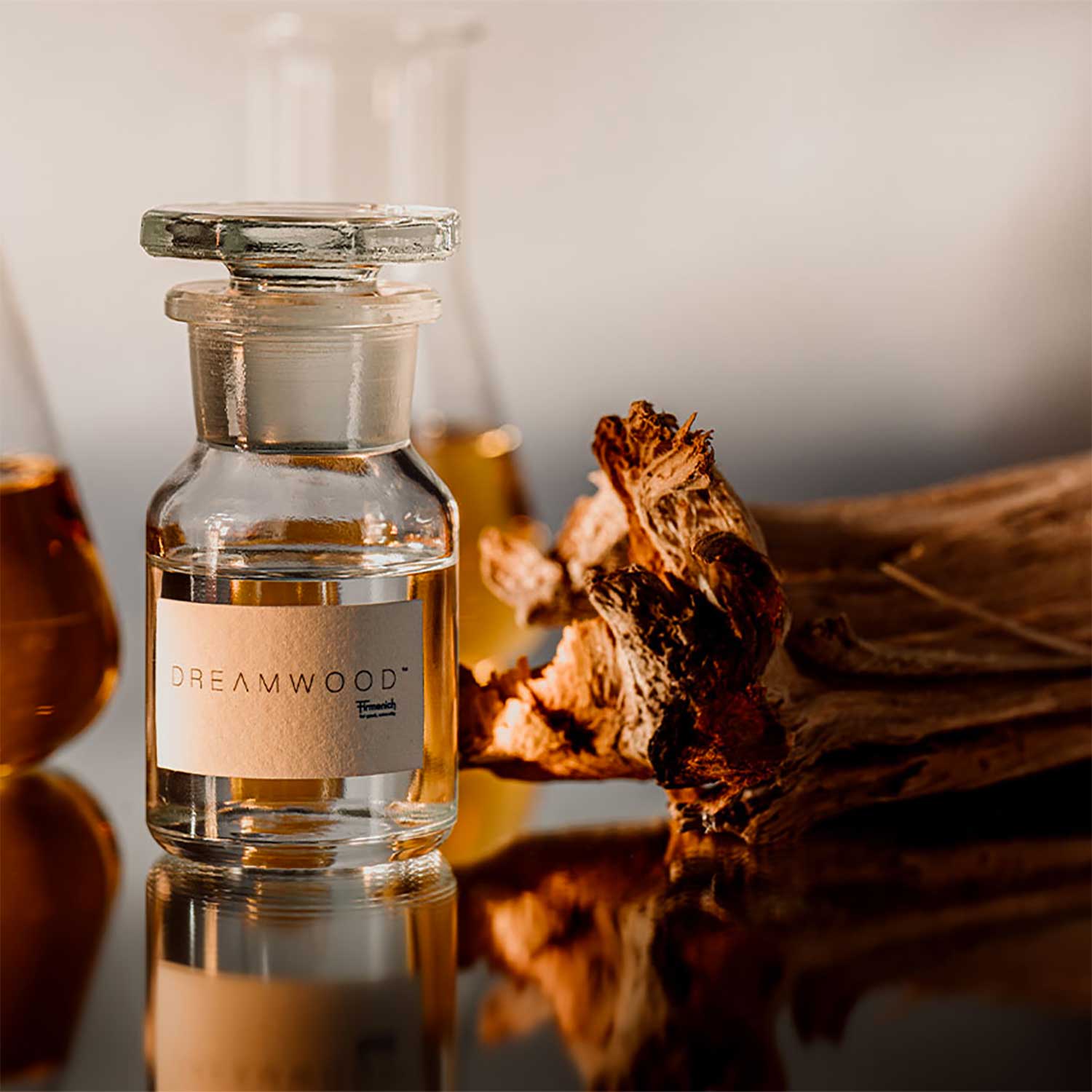